Chapter 8 of A Land So Strange exemplifies the changing roles that are taken by the four remaining survivors of the Florida expedition. Primarily, they are renown within several Indian communities as healers and for this reason, Andrés Reséndez maintains that “Four naked and unarmed outsiders were led by hundreds, even thousands, of Indians. They were fed and protected and passed off from one indigenous group to the next, as if they were prized possessions moving along an ancient trading route across the continent” (188). Medicine men is exactly what these men were deemed to be at this point in their journey. They sharpened their skills and were performing much more complicated procedures. A ritual soon enveloped and the four castaways would travel from community to community healing natives and receiving food, shelter, and elaborate gifts in return. This quote portrays the invaluable nature of the healers by the Indian communties and objectifies their presence. Their reputation becomes determined by others based off of their doings and a huge sense of responsibility overtakes them with this job. The above quote also implies the inescapable life that they had to live in before continuing the exploration that they had set out to do. Along the same lines, it is important for understanding the different lifestyles the castaways had to adapt to and the difficulties that the natives had imposed on them and their lives. 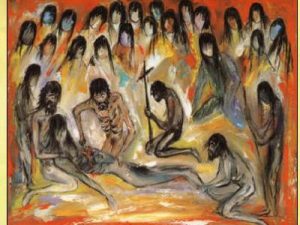