The History of gods in Latin America and their impact on the Spanish colonial machine. 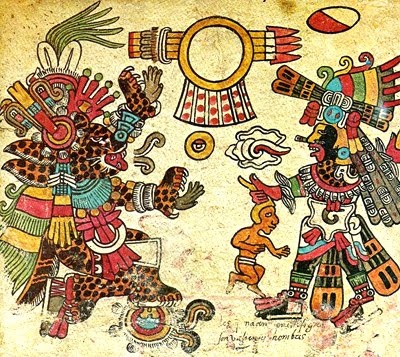 I have possible interests in conducting research on the topic of the evolution of religion in Latin America. I would specifically want to explore the history of deities worshipped before colonisation of latin America took place: the origin stories of the Native Americans, their gods and deities. I would like to then superimpose these stories in order to better understand how the native Americans must have interpreted their first interactions with the Spanish and other colonial powers. Which of their deities did they identify them as? Why? Was it how they dressed? I would like to then briefly analyse how these beliefs must have evolved as the Native American interactions with the colonial powers progressed. Did they adopt the new gods the French brought with them across the ocean? How readily? What happened to their own gods and beliefs? Did a fusion of cultures take place? A “creolization” of religious beliefs and cultures where the traits of their different religions and gods fused and formed a new god. These are the questions I would like to explore in my research.

Specific information on the origins of the deities in existence in Latin America exists but is limited on Wikipedia. This article for example on the deity Abira has only one line that does very little to explain the Native American people’s attitudes and beliefs in Abira. Credo has articles around the deities in general, but none on the deity Abira- “the creator God of the people of Colombia”- Wikipedia.

A second topic I would very interested in exploring is the health repercussions the Native American society’s interactions with Europeans had on their populations. I would like to explore the death tolls from the various diseases that overtook these communities that had not up until interacted with dysentery and the myriad diseases the Spanish brought with them from Spanish cities. I would like to explore what impact this unprecedented biological pathogenic explosion must have had on the Spanish colonial machine. How much more effective was the Spanish conquest because of the emergence of disease as a factor in the colonisation of Latin America? Was it intentional? What was the impact on the genetic diversity of the population? What was the impact on their culture and their ability to resist colonisation? I would like to explore these questions in my research.

Wikipedia has information on this as do many other scholarly sources in what they term “The Columbian Exchange” It has been classified as a Level 4 vital article of importance on Wikipedia, and rated as a C-class article. There has been little activity on the topic’s talk page with the most recent activity being from 2009. On Credo, this topic has multiple articles and sources on it, however a distinct analysis of the impact of these diseases on the colonisation process seems missing. Perhaps this is because of lack of accurate record keeping in the period this phenomenon transpired. Notwithstanding, an impact analysis seems lacking and this remains a possible research topic of great interest.