In this article from The Diplomat, author Dawisson Belém Lopes opens up by giving historical examples of countries using a method called pendulum diplomacy. This form of diplomacy involves a third party country avoiding full investment in a single country when conflict arises between multiple governmental superpowers. The author first gives the example of Brazil reaping benefits from both the United States and Nazi Germany following World War II. Egypt is also mentioned in reference to the Egyptian president, Gamal Abdel Nasser’s refusal to choose sides during the Cold War, allowing them to prevent losing territory or jurisdiction within certain regions of Egypt. The author proceeds with more examples of pendulum diplomacy in Latin America following World War II, noting Brazilian President Kubitschek’s Operation Plan America, which forced JFK to pour funds into an impoverished Latin America, protecting the vulnerable South American countries from communist influence. 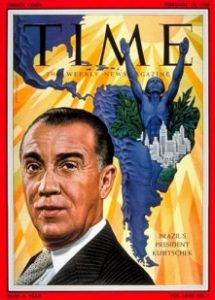 In the final section of the article, Lopes discusses the modern day application of pendulum diplomacy. In recent years, a need has arisen for the now dormant use of pendulum diplomacy. But whether or not such tactics will work in today’s society, the author expresses doubts. For one, the region does not contain any of the world’s dominant superpowers (at the moment), and Latin America is expressly non nuclear, increasing the threat of Chinese and Russian intervention. Furthermore, difficulties to pursue strengthened relationships with the US have increased as a result of the Trump administration and it’s unprofessional prejudice towards Latin America. For this reason, several counties in South America have shifted their dependance away from countries like China, Japan, and South Korea, and instead are focusing on leveling their relationships across Asia. This means emphasizing trade between countries in Southeast Asia, like Taiwan, as mentioned in the article. Resulting from the recent conditions and arising conflicts between governmental superpowers, Latin American countries may likely look for new tactics to ensure their prosperity in the 21st century. 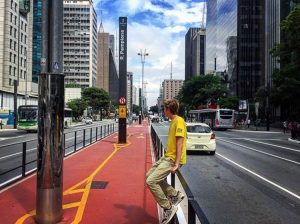 Hub of business and Brazilian metropolitan culture in São Paulo where the growth of the city can be seen at an exponential rate. Avenida Paulista, São Paulo, Brazil.

Little perspective and opinion on Latin America is shown, until the end of the article where an image of poverty and corruption is illustrated about Latin America. The author holds a surprisingly aggressive and ignorant viewpoint on South America. Interesting enough, Lopes references an “ugly” speech by Donald Trump in which the president remarks Latin Americans (Mexicans) as “outlaws” and “rapists.” Two paragraphs later, Lopes describes all of Latin America as one region, saying that Latin America as a whole, “does not apparently have what it takes to becoming a strategic asset to either side of the Pacific Ocean – North America and Asia,” (Lopes).  By grouping Latin America as a whole into one, this scrutinizes the ability and potential of countries like Brazil who are soon to join the world’s top economies. However, the author is correct that Brazil and other Latin American countries are unable to compete with the US and China in their current state. 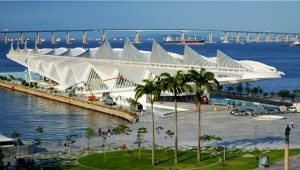 Picture of the Museum of Tomorrow, built before the Olympics, the museum focuses on the future of the earth, and how countries will be forced to adapt in order for the human race to prosper. Museo do Amanhã (Museum of Tomorrow), Rio de Janeiro, Brazil.