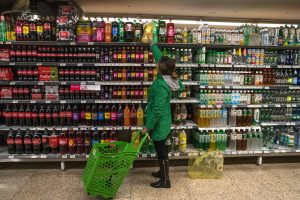 This was a long article with lots of information, so I will try to sum it up as best I can. Dr. Esperanza Cerón, head of the organization Educar Consumidores, was working to promote a tax on sugary drinks that many experts believe to be a cause of obesity in Colombia and globally. She and her organization raised money and awareness of the issue, all the while supporting the installation of a 20% tax on sugary drinks. They even created a television ad that alerted the citizens of Colombia of the connection between sugary drinks and obesity and diabetes. As a result of Dr. Cerón’s actions in support of the tax, she and her colleagues were harassed, and the sugar drink industry, led by a company called Postobón, worked to shut her work down. Cerón and her colleagues found that their computers and phones began operating in a strange manner, and men were seen taking pictures of the organization’s office. Cerón was even followed while driving and approached in public, being told to be silent and to stop what she was doing. She no longer drives alone.

Postobón sent a complaint to the government, and soon after Dr. Cerón’s ad was taken off the air. What’s more, she and her organization were no longer allowed to publicly discuss the health risks of sugar, effectively silencing her and Educar Consumidores. Though Cerón reported the harassment she and her colleagues faced to authorities, federal prosecutors declined to investigate. However, after being silenced, Cerón wrote a blog post about the issue. RCN Televisión, the biggest media company in Colombia, claimed intellectual property theft due to the content of her blog post, so she took it down, but RCN sent a complaint to federal prosecutors, who ironically did not decline to investigate this time. She faces a possible fine of $300,000.

Eventually, the Constitutional Court of Colombia overturned the decision from the government agency that silenced Educar Consumidores. However, this happened after the Colombian Congress had voted against the tax that Cerón was working to promote.

This article portrays Latin Americans in an interesting way. The majority of Colombians supported the tax, yet when people tried to speak out and support it, the government and the soda industry shut them down. Thus I think this article is a good representation of the perpetual struggle against corruption in Latin America. I think it reflects positively on Latin American citizens, but negatively on the governments they live under. To what extent Latin Americans are to blame for their corrupt governments is a topic of much debate, and the US often receives a large portion of the blame. However, I think ultimately the article shows that Latin Americans are an intelligent and advanced group of people who could truly prosper if political corruption, weak economies, and political instability weren’t such large issues. This article did a good job of revealing how much power and control the large companies have over the Colombian government, which negatively effects Colombian citizens in the long run, particularly in this case with regards to their health.

I would recommend that anyone interested in what I’ve written about here go check out the article I wrote about, as it goes a lot more in depths than I could in this blog post.