In the New York Times article In Latin America, Pence Aims to Soften ‘America First’ Message, the author, Ernesto Londono, outlines a recent trip by Vice President Mike Pence to several countries in Latin America. The purpose of his visit being to President Trumps “America first” message, however little action is actually being taken. The US plans to create deals to open imports of avocados from Columbia, and exports of rice to Columbia, with the author regarding Pence’s actions as doing “ little in the way of concrete measures to announce,” (Londono). Many Latin Americans are hesitant to believe that the Trump administration truly intends to work towards a greater compromise for the US and its allies. Instead, many have stated that they are fearful of the common theme of the US being a bully. The severity is of this current crisis is apparent when a Member of the US Congress notes that, “unsure of what the White House’s intentions are and fear either a return to the days of U.S. arrogance and bullying or, at best, benign neglect,” (Member of US congress).

Furthermore, this statement comes from Mexican media outlets, giving the weight of the Member of Congress’s statement further magnitude. Camila Capriglioni, 21, a medical student in Buenos Aires proclaims that,.“if I put myself in the shoes of an American citizen, I understand the appeal of trying to prioritize your national interests.” The US has no reason to act so hostile towards Latin American countries; his intents are extreme. 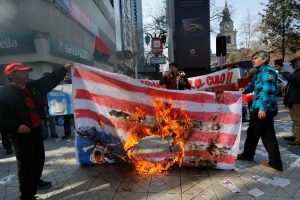 The strong-willed Latin American community coming forth and visualizing their opinions to the Vice President of the United States, personifies nothing less than the bully that Donald Trump has become in concordance with Latin America. The class theme of Identity can be seen here with the Latin American decisiveness portrayed by general population that inhabits Latin america.