This past Thursday, an earthquake with a magnitude of 8.2 struck the coast of Mexico and its nearby cities. The aftermath has left many Mexican residents with dilapidated homes, human loss, fear of aftershock, and a struggle to rebuild as they wait for relief efforts. This article gives its readers a look into what many of the residents of Oaxaca have to say about the damage that this earthquake has caused.

One resident by the name of Eneida Jimenez remarks, “Our house is now this almond tree.” Most homes are simply debris and little infrastructure remains. Residents like Jimenez are in a state of limbo as they patiently wait for rebuilding and repair assistance. This is quite different from the United States as most houses in Mexico do not have insurance. As a result, their only means of aid comes from the government and/or one’s relatives. Many residents have invested a lot of time and money into their homes over the span of many years, and to lose such an integral piece of their lives has been a huge setback.

The fear of aftershock is also greatly justified as a number of smaller earthquakes have struck nearby areas, including one that occurred close to Oaxaca this Sunday with a magnitude of 5.2. Consequently, several cities like Oaxaca, Juchitin have been deemed as “disaster zones” as they are less developed and many deaths from the earthquake originated from them.

Something particularly tragic about the earthquake is that cemeteries lay in ruins and tombstones are cracked and broken. A woman by the name of Margarita Degante was laid to rest in her tomb after she and her family members were in their hotel sleeping when suddenly the earthquake hit, the building collapsed, and they became trapped inside. Her husband, a survivor of the incident, also returned to his home to find it torn to the ground. At his wife’s funeral, the only words he could speak were, “I’m sorry. I can’t.” The devastation was unfathomable. Unfortunately, dozens of deaths and a lot of heartache have resulted from this natural disaster.

An earthquake of such magnitude will be difficult to recover from. As of now, a waiting period rests upon these Mexican residents. They continue to use whatever they can to get rest and reassemble.

You may ask how the course theme of identity can be related to a natural disaster. One’s identity can be said to be comprised of a series of experiences in addition to one’s beliefs, background, and culture. This experience was obviously a traumatic one for many people of Mexico, but it most probably led to groups and communities coming together to overcome such an obstacle. It is likely that this interaction strengthened bonds between these people, leading to a revised identity where working together is an important part of their lives. 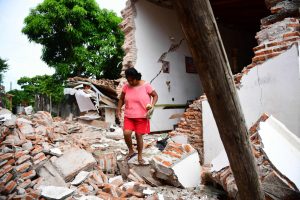