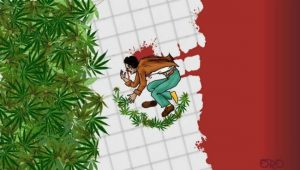 A location scout by the name of Carlos Muñoz Portal has been found dead in Mexico. He was scouting for locations to shoot scenes for the popular Netflix show ‘Narcos’. The 37 year old’s body was found riddled with bullets in his car just outside Mexico City. The article goes on to describe the main premise of Narcos, which, according to the article, is about “the gritty wars of the 1980s between drug kingpins and law enforcement agencies”. Furthermore, the article describes the context of the murder of Muñoz, which essentially is only one of thousands of murders that have occurred throughout Mexico this year.

The cultural and social implications of this article are much greater than they may seem at first glance. Regardless of how the author wishes to depict Mexico, one cannot tell this news story with a positive connotation for Mexico. In other words, this story makes Mexico look bad, no matter how you put it. This is particularly interesting when one considers the implications within the United States. For one thing, many people are upset at Trump and his supporters for the way they treat and talk about Mexican immigrants, but this kind of story gives allows those who are racist and bigoted to say “look at how violent Mexico is, we don’t want those people coming into our country”. The fact that Mexico has had over 2,200 recorded murders nationwide in the month of June alone makes it even worse. It is difficult to convince those who are prejudiced against Mexicans that they are not all gangsters or criminals when over 2,200 people have been murdered in Mexico in one month. Not only that, but I find the article itself to be incredibly ironic. A location scout for a show about gang violence in the 80s was murdered in Mexico just last week, proving that violence in Latin America is still a large problem.

In terms of identities, it is sad to see that Mexico seems unable to rid itself of its identity as a country full of violent gangs and poverty. This makes Mexico and Mexicans (and consequently all Latin Americans) look bad on the world stage, and the murder rate in Mexico right now can only worsen Mexican-American relations. It is important for the Mexican government to find a way to deal with the rampant violence plaguing Mexico, because as stated previously, articles such as this one will only serve to give more fuel to the fires of those who are prejudiced against Mexicans.