This article examines the importance of education in Latin America in eliminating social inequality and injustice. It is immediately fascinating that a publication coined, “The Economist” examines the issue of gender and sexuality in such depth and offers such insights and analysis on it- an issue normally thought purely social and a humanity. It immediately speaks to the relevance and impact of sexuality and gender on every other area of industry, commerce, science and the arts. Gender and sexuality are ubiquitous issues. This article demonstrates then that these issues and the problems around them are just as ubiquitous across the world. From Europe, to Brazil, Peru,  to Argentina. It argues that the solutions to these problems lies in making conversations as ubiquitous as the issues themselves.

The article begins by examining the battle for education in Latin America, and how as education policy is politicized across Latin America, the question of whether or not children in Latin America grow up with gender and sex education is an ongoing and urgent one. Referencing efforts to introduce a new curriculum more cognisant of gender roles and identity in Peru and the backlash that this effort has attracted in the conservative leaning groups in the region. This has not been an isolated incident.  The article immediately begins by outlining that girls and boys have the same right to education regardless of their genders and sexuality. The problem then is that these “assigned gender roles” result in girls dropping out of school. This poses one of the first clear problems identified by this article and the larger relevance of sexuality and gender in society.

Assigned gender roles can lead to girls dropping out of school.

Efforts like this campaign to educate children on sexuality and gender in a new curriculum have led to an acute backlash and conspiracies that the identity of the Latin American child is under threat from conservative and catholic and some protestant groups. Movements like the Con Mis Hijos No Te Metas (“don’t mess with my kids”) have been birthed in the wake of these upheavals.

This article points out general public and political statement is against conversation about gender identities and sexuality becoming mainstream. Protests by Con Mis Hijos No Te Metas led to the censuring of the Peruvian minister of education and the appointment of a more conservative leaning minister. Immediately, a problem is identifiable here:

Gender issues cannot be solved while they are not talked about.

The article then cites the opposition to the legalisation of gay marriage in Mexico last year, and the protests that followed  under the slogan of Con Mis Hijos No Se Metan (“no one messes with my kids”)- eerily similar to the Con Mis Hijos No Te Metas (“don’t mess with my kids”)  of Peru. Similar protests under similar banners took place in Europe for example in France and Poland.

It is clear then that the conservatives are united across geographical remoteness, and are coordinated in their opposition of gender related conversation and progressiveness. The article suggests a link between such attitudes and the church, and the overall opinion that women are inferior to men having led injustice and violence. Nevertheless, the writer admits that a lot of progress has been made in the last recent years.

Contraception is now widely used. Women have fewer children and a bigger say in the decision.In some countries, abortion has been legalised. Gay or lesbian marriage has been legalised too, Argentina, Brazil, Uruguay, and some parts of Mexico. Female wages corresponding to males at the same levels in organisational hierarchies are nearing each other now, although differences still exist across many industries and countries.

at least a third of Latin American women suffer domestic or sexual violence. 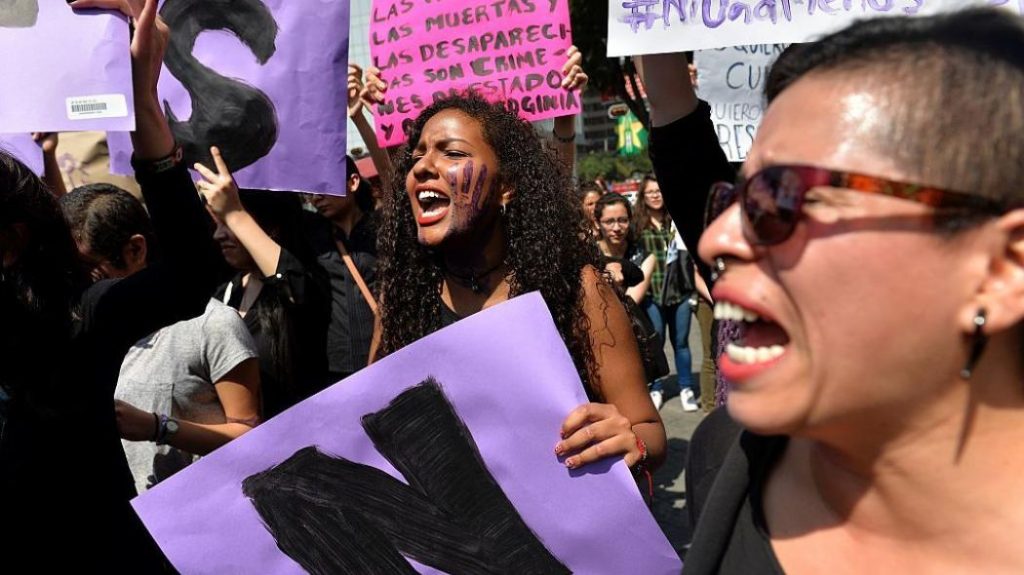 Women strike in Argentina after the brutal rape of a 16 year old girl.

Contraception is still very hard to access in many poor areas.

The article states that although progress continues to be made, the conservatives continue to dominate the conversation, and a more equal conversation needs to take place to alter education and eliminate the “subconscious prejudices”  that so lead to gender discrimination and violence.