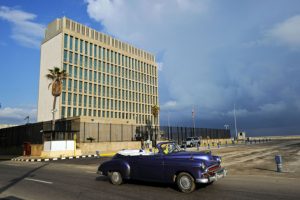 (Pictured above is the U.S Embassy in Havana, Cuba)

Mysterious incidents that have been referred to as “sonic attacks” have occurred in Cuba over the past year, affecting a minimum of 22 American diplomatic workers who work in Havana at the U.S. embassy. The attacks have resulted with serious injuries with some American workers suffering from brain trauma and others with permanent hearing loss. It is evident that the impact of these ongoing sonic attacks have been severe, which has resulted in the media and many Americans to bring the issue to people’s attention.

Placing the blame on Cuba and conducting FBI investigations have been avoided because the relationship between Cuba and the United States has always been treacherous. In fact, only in 2015 did diplomatic relations between the United States and Cuba reopen. However, the FBI has recently traveled to the island and have conducted investigations, but the culprit or device that has induced such harm are yet to be discovered. Trump spoke this past Monday and revealed in a news conference that he believes that Cuba is responsible for these incidents. The fault with this statement, however, is that there is no evidence to support it. The government of Cuba has denied having any involvement or knowledge of the incidents. As noted in the article and something to be considered when evaluating this issue, “the U.S. has pointed to Cuba’s tight control over security in Havana and its close surveillance of Americans working there are reasons to believe that Cuba might know more about what’s transpired than it has let on” (Staff and agencies). The U.S. claims that under international law, it is Cuba’s duty to protect American embassy workers and the White House chief corroborates this by declaring that these incidents can be preventable if Castro’s government take action. Although investigations have been conducted and declarations have been said from both countries, the overall situation remains to be a rather murky one. 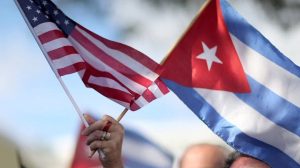 How will this impact U.S./Cuban relations?

As explained in history books and represented in the media, it can be known that tension has almost always existed between Cuba and the United States. Only recently (2015) has this fact changed. However, it is quite possible that with these so-called “sonic attacks,” tension will revert to how it was in the past. After reading the article, I gained the perspective that neither the United States nor Cuba are being portrayed in a positive light. As a preface, I do not know who or what is to be blame, but this is what I gathered after my reading of the article. Firstly, the United States appears to be acting as a bully, placing blame on the other when blame may not necessarily be due, especially since there is little evidence to support any allegations. The United States also seems to be instigating unnecessary melee. At the same time, Cuba appears to be weak because international law was not followed, American men were injured on their soil, and no proof was provided that they are not at fault, which only provokes the U.S. to make the claims that they have made. With these ongoing incidents, it seems as though peace and cooperation between the U.S. and Cuba will take a long time to attain. 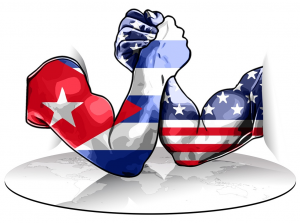 Will Cuba and the United States be forever enemies?

The identity of Cuba in the perspective of the United States has been damaged with these recent sonic attacks, primarily because Americans have been harmed in Cuba. I find it to be rather unfortunate because as diplomatic relations were in the early stages of restoration, incidents like these have taken place and have caused tensions to rise. One can say that the identity of the United States as a superpower is also amplified because of the blame it has placed on Cuba.