VIEWER DISCRECTION FOR THE PICTURE

This CNN article explains how the slow collapse of the Venezuelan government is affecting the people. It begins with talking about a dying child who cannot receive any medical treatment to improve his condition because the hospital does not have the supplies to complete the surgery. The hospital is running low on basic things such as gauze. Gillespie shares jarring statistics such as there has been a 76% increase in Malaria cases, but Venezuela eradicated Malaria more than 50 years ago. Gillespie explains that the Venezuelan government is in serious debt and as a result they are not giving hospitals proper funding which is causing people to die.

Gillespie explains how the government got themselves in this predicament and basically, it’s because they were spending too much. Also, their biggest natural recourse is oil and since the spending spree began, the oil prices have fallen. Venezuela cannot afford to pay back their debts and, not only are people dying, but they are leaving the country. There has been an increase in Venezuelan immigrants in other countries, but especially in Colombia. Gillespie also explains how there is rapid inflation in Venezuela and as a result a jar of peanut butter costs 80,000 bolivars which means one bolivar is worth less then a hundredth of a penny. People are waiting in line for hours to first, get many from the ATM, and then to try and by groceries.

Gillespie argument is for the countries of the world to not let the Venezuelan people suffer any longer. He has quotes from Venezuelans who wish their president would give up power to someone who can fix their problems. Gillespie writing style itself is very persuasive to try and help. He talks about a boy who is dying from kidney failure, then explains the countries problems and such, and goes back to say that the boy died. Gillespie makes the reader connect to the child by saying the child wanted to be an international journalist and by having quotes from the child’s mother. Gillespie also explains how the mother cried several times during the interview and how later he cried. Gillespie also expertly uses the photo of the boy (see below) to also show how real the situation is. This provokes sympathy in the reader to try and help the children if nothing else and in turn has the reader completely on board with his argument. 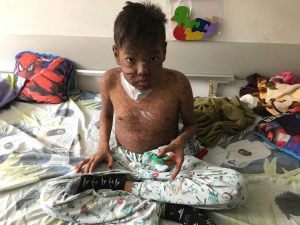