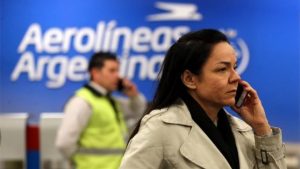 Currently, Argentina is having some issues with its flights. Two different airlines, Austral Líneas Aéreas and Aerolíneas Argentinas (a state-run airline), are dealing with strikes from workers demanding salary increases. According to the BBC article, inflation in Argentina is expected to reach 22% this year, which is the reason these workers want their salaries increased. The workers represent five different labor unions, and these unions are threatening further strikes if these initial ones do not work. However, the president of Aerolíneas Argentinas argues that the workers’ salaries were “good compared to those at other firms”. Regardless, these strikes have caused nearly 400 domestic and international flights to be cancelled.

One could argue that because this article comes from the BBC and not Latin America itself, it has the potential to be biased against Latin Americans. An article like this one, one might argue, portrays Latin American countries in a negative light, as it highlights Argentina’s struggle with inflation and the results of such a struggle. Poor economies have plagued Latin America since the nations there were first established, and when we ignore the larger picture, we might lead people to believe that Latin Americans in general are not good at maintaining strong economies. However, the article fails to mention that a large part of the reason these economies are weak in the first place is due to the intervention/meddling from the US and other powers.

I would argue that the prevalence of weak economies in Latin America has a negative effect on the identity of Latin Americans as a whole, although I think the history of colonialism in the region and of imperialism at the hands of countries like the US are the main causes of the perpetual political and economic strife in Latin America. Weak economies cause the poor to stay poor and the divide between rich and poor to grow. Inevitably, with poverty and a lack of opportunity comes crime, gangs, and violence, which further negatively effect the identity of Latin Americans as a whole. The strike of these airline workers is merely a symptom of a much larger issue that Latin American hasn’t been able to solve for quite some time, and until the issue is resolved somehow, the issue will continue to negatively impact Latin Americans and their identity.