The article I picked for this week is especially fitting as it touches on something Cesar mentioned in his presentation today; corruption in the Guatemalan government. While the author argues something a little different than Cesar does, in that he says that Guatemala has made successful strides in cleaning up government corruption, especially comparatively to the rest of Latin America. Currently there’s a UN sponsored commission that is attempting to end corruption in Guatemala called CICIG, and they’ve allegedly done a very good job at holding corrupt officials accountable for their actions. The article puts a lot of the blame on the judicial system in Latin America, claiming it protects local and federal political elites. However, there is fear that if CICIG gets disbanded that things will just return to the same they’ve always been, or that Guatemala is being controlled by outsiders, primarily by the US, which has a reputation of messing around in Latin America, much to the detriment of the citizens of these countries. 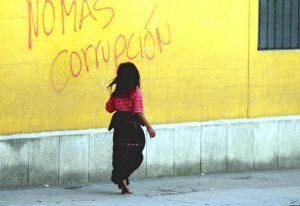 While the title of the article is Outsiders Can’t Clean Up Latin America’s Corruption, I personally feel like the author makes the opposite argument in saying that the UN sponsored commission has done an excellent job. The author himself says “the UN crime busters have won ample accolades and street cred. On their watch, convictions for homicides soared and the homicide rate plunged. A dozen tainted judges and some 2,500 crooked bad police have been sacked.” While the author does express concern that if the UN backed out, there would be nothing holding corrupt officials and indicted officials responsible for their actions, I think that the amount of attention that has been cast on the issue globally through the UN and the power of visibility via modern technology that Will brought up in his pecha kucha on Brazil, could be enough to hold people responsible for their wrongdoings.