The Miss Perú Beauty Pageant took place this past week and it was not your ordinary pageant. It was a pageant in which the contestants raised their voices to shed light on the multitude of gender-based violences that are afflicting Latin America, such as femicide and rape. During the portion of the pageant where the contestants are to report their name and body measurements, the women defiantly reported a statistic about gender-based violence that has harmed thousands of Latin American women. 23 were listed. One example is subtitled in the image below. 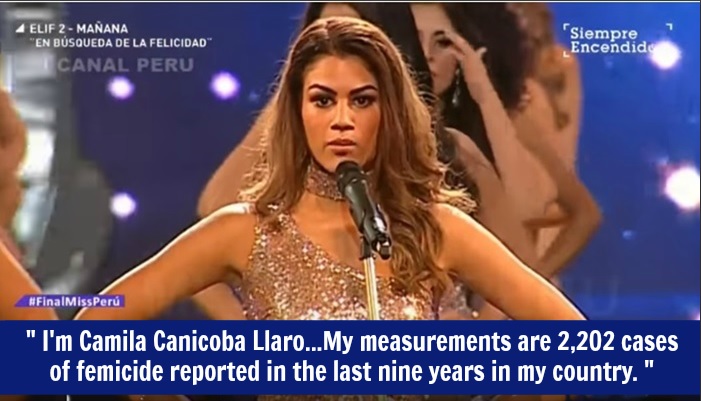 Another contestant by the name of Bélgica Guerra expressed, “My measurements are: the 65 percent of university women who are assaulted by their partners.”

Almendra Marroquín of Cañete asserted, “My measurements are: more than 25 percent of girls and teenagers are abused in their schools.”

The audience applauded this form of protest which has never previously taken place in Latin America. Interestingly, the authors of the article make a comparison to the statements of sexual abuse that have been voiced by American actresses in the U.S. media. However, the issues in Latin America, as supported by the statistics given by these women are occurring far too often and far too much. This campaign was organized by Luciana Olivares who explains her motives eloquently, “The idea was to call attention and get people to react. These figures aren’t beautiful at all, they’re very much the opposite” (Abad and Casey). The intent of this campaign is positive as it demonstrates the severity of gender-based violence in Latin America and shocks a large audience.

One may ask the question, however, is a beauty pageant the right place to speak about these issues? In a way, this demonstration is a contradiction, but it also proves a valid point. People who are strong supporters of the idea of feminism (which is simply defined as the belief in political, social, and economic equality for women and men) may be led to believe that this is a double standard, which the article suggests. These women are speaking about these issues in an effort to achieve gender equality, but are walking in bikinis being judged by men for their appearance. However, this also brings up another argument, which is that there is no excuse, such as a short dress or a revealing top, for sexual violence. Women are entitled to dress the way that they please without the fear of being victimized or abused. I believe that this was a powerful approach to bring these issues into light.

We have previously discussed femicide in class, but it has never been presented in this way. Violence against women is evident and the identity of Latin American women is being undermined and deteriorated with these acts of violence. How do we live in a century where inequality is still perpetuated? This form of protest, however, is part of a greater movement in Latin America that is taking stance against femicide and gender-based violence that is called “Ni Una Menos” (“No One Less”). Protests have been seen throughout Mexico, Bolivia, Colombia, Argentina, and Brazil over the past few years, and this marks an important time in history where women are fighting for their rights and lives that they equally deserve. On a more positive note, action like this is certainly a step in the right direction to grant equality to all Latin American women and to hopefully eliminate all traces of unjustified femicide and gender-based violence.