Catholic News Agency Mary Rezac Have you heard of Saint Death? Don’t pray to her

In “Santa Muerte: The rise of Mexico’s death ‘saint’” it explains who this ‘saint’ is. Santa Muerte is a ‘saint’ who is non-judgmental that many single mothers, members of the LGBT, and gang members pray to her. Santa Muerte serves as a ‘saint’ for the people who are treated as outcasts. The people who follow this religion feel it is deeply misunderstood and it is not a satanic mass. Worshipping Santa Muerte has surged in popularity and has about 10 to 12 million followers world-wide. Many of Santa Muerte’s followers believe she is the reincarnation of the Aztec goddess Mictecacihuatl, who presided over a festival of death every August. This article explains that members of this religion have decided to make Day of the Dead her feast day, which is angering the Catholic church. The Vatican has denounced Santa Muerte and repeatedly says this every year around the Day of the Dead to make clear she is not a part of the Catholic church nor will she ever be.

These two articles authors had very different purposes in their writing. The author from BBC wanted to briefly explain who Santa Muerte is and what her worshippers are like, while the author for the CNA’s intentions is to explain to readers why not to pray to Santa Muerte. Of course, the author’s viewpoints are going to be different because their readers are different. BBC news is for everyone to read while the CNA’s target audience is for Catholics. These two articles about the same topic prove how the target audience can affect the author’s argument.

Santa Muerte portrays the Mexican people as people who are deeply religious. While she is not tied to the Catholic church like most saints her presence still shows Mexicans as deeply spiritual and wanting a religious figure.

One of the reason’s I chose Santa Muerte is because of the class discussions the class has had together. One of the things we have talked about in class is the local saints that exist in Latin America and the effect they can have on a community. However, unlike the saints talked about in class the Catholic church has renounced her and has made it clear she will never be a saint to them. Santa Muerte is almost a ‘saint’ for the outcasts and can make them feel accepted for who they are, but she is also serving as an excuse for some gang members. Santa Muerte is very helpful for the people who consider themselves outcasts. She has helped their identity greatly. The gang members feel since Santa Muerte is accepting the gang members do not have to improve who they are. Another heavily talked about topic in class is gang violence and cartels. It is interesting how the rise of gangs has indirectly increased the popularity of Santa Muerte. 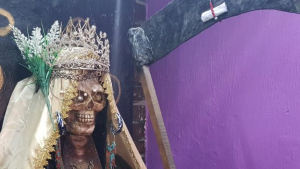