Thanks again to Megan for a very productive workshop!

Here is the link for the EdTech iMovie Tutorial.

We’ll have peer review of your scripts in class on Monday, December 4th.  (Remember: the full assignment guidelines are here, along with some helpful links, technology tips, and the learning goals for the project.)

Some more resources from Megan:

At the very bottom of this page is an example of a student project of a digital essay.

Link to Film by Ed Tech: Wooster in Autumn

Megan’s Doodle:  https://doodle.com/msmeznik  (to make appointments for tech support – but make sure you reach out to her

From Megan: My cubicle is located on the 4th floor of Morgan #410. They can just ask at the HelpDesk and one of the students or staff will direct them to me.

Check out the rich schedule of events for International Education Week!

Events start this Friday night, November 3rd at 7:30 in McGaw Chapel with the Culture Show.

According to the organizers, “last year, we had 900 people attend the show overall and we hope we can make this year even more successful.The idea is to bridge the gap between international and domestic students AND for the campus community to come together to encourage the cultural diversity represented at Wooster.”

This is a great opportunity for anyone looking for a multicultural event as part of your Instagram project.

If you plan to major in Biology, Biochemistry, Chemistry, Computer Science, Geology, Math, Neuroscience or Physics come and hear faculty from each program explain the major and answer questions. You can also meet upperclassmen within the majors.

I write to pass on some information about Fall Break Service Opportunities from the Dean of Students Office.  Think of these of other opportunities to be involved in the wider community!

We want to make you aware of a great opportunity for your students. Over Fall Break, several of our service organizations are looking for volunteers. This is a great opportunity for first-years to learn about our service projects here on campus. This is also a good way to get them out of their dorms and into the community. We will be advertising this unique break activity in our October Newsletter, but we would also appreciate you mentioning it in your classes.

Here is the sign up for the various days and sections needed:

If you or your students have questions, please contact Nate Addington, Director of Civic and Social Responsibility (naddington@wooster.edu). Hopefully this will help the students engage with the community and provide some service to our local organizations. Thank you and have a wonderful weekend.

I write to share an announcement from Proyecto Latino inviting you to show your solidarity with Wooster’s DACA students and others affected by the end of DACA:

“In the wake of the Trump administration’s recent announcement over the end of DACA, it is imperative for the Wooster community to come together in solidarity with DACA recipients and undocumented immigrants both at Wooster and nationwide.
Tomorrow (9/12), we are are planning to show our support with a demonstration. We will gather to take a group photo at Kauke Arch at 10:50 am, then walk to Lowry and stand along the sidewalks holding signs of solidarity. We will also have members of the campus community speak.
Make some posters and spread the word. 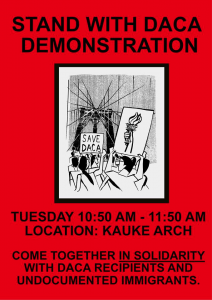 Here are the instructions for using the VPN to connect from off campus.

Come to class prepared to discuss the readings, and the following questions:

Spotify has a DespaSummer playlist that includes many of the songs mentioned in Asha’s LA Times article, including “Mi Gente” and “Me Rehúso.”

In this August 23, 207 article from the New York Times, journalist Simon Romero examines the persistence of bilingual Spanish and English communities in the United States.  Romero argues that even in a political climate that is increasingly hostile to non-English speakers and Latinos (whether immigrant and native-born), bilingualism and Spanish language cultural forms remain  vibrant.  Drawing on examples from businesses, advertisements, television, and music, Romero depicts a “vast laboratory showcasing the remarkable endurance of Spanish (Romero).”  This continued cultural vibrancy is a result of many interrelated factors, including the deep historical roots of Spanish in the Southwestern U.S., the large numbers of Spanish language speakers worldwide, and the patterns of migration and return migration that bring native speakers to the U.S.

While the first part of Romero’s article examines dual-language communities where everything from signs at banks, restaurant menus, and laundromat instructions are posted in both Spanish and English, he quickly turns to discussing the growing number of places where fully-bilingual young people conduct their daily lives using both languages.  Indeed Spanglish, whether people just pepper their conversations with phrases from one language and then the other, or switch from speaking Spanish with their abuelos to English at school, is more and more common.

Unlike many traditionalists who see this linguistic fluidity as degrading both Spanish and English, Romero depicts Spanglish as a new cultural form reflecting the hybrid cultural identities of its speakers.  Among the proponents of Spanglish Romero quotes is Professor Ilan Stavans (who has published some very interesting graphic novels on the history of Spanish Jews in colonial New Mexico in addition to his work on Spanglish), who describes Spanglish as “a mestizo language” vibrant and reflecting the lived experiences of its millions of Speakers in the U.S. (Stavans, as quoted by Romero).  Romero’s approach emphasizes cultural resistance in a time of political hostility.

I  see many links between this article and our class themes.  First, it reminds me of our discussions of Thomas Holloway, and the constantly-renewed historical links between Latin Americans and their diasporic communities in the U.S.  It also reminds me of our discussions of Buissert’s Creolization in the Americas.  The couple in Telemundo’s soap opera who switch effortlessly between English and Spanish as they drive to their appointment are certainly artistic representations of a modern way of expressing ideas and feelings in an evolving cultural context.

FYS students, I write to share this announcement from Dr. Kille in Political Science:

The Model United Nations informational meeting is this Wednesday August 30 at 5:30pm in Kauke 038.  All students with an interest are welcome to attend.

This semester the team will be representing Denmark at the American Model United Nations held in Chicago right before Thanksgiving.  No previous experience is necessary and all students are welcome to participate!  The team will meet every Wednesday 5:30-6:30 this semester in preparation for the competition

If you have any questions, feel free to contact the Model UN Faculty Advisor Professor Kent Kille at kkille@wooster.edu. You can also connect with us at facebook.com/woomun