The article I chose primarily for this week is entitled “Why is there talk of banning funk music in Brazil?”.The article discusses how Brazilian funk is becoming an ostracized music genre due to the content and reoccurring themes in its songs. The article begins by comparing the alienation of the genre to Samba, also known as “Brazil’s most iconic and widely acclaimed musical style”. In the early twentieth century, notably under the Vargas dictatorship, Brazilians were persecuted and arrested for enjoying a music genre that symbolized their culture. This year Samba is celebrating its 100 years in Brazilian pop culture because its roots of being “the music of former slaves and their sons” was ultimately forgotten. Though it appears that Samba got its happy ending, its spot was just taken by Brazilian funk, now being criminalized for its content and its apparent encouragement of crime, drug trafficking, and inappropriate sexual encounters. Opponents of the musical genre took to Facebook to create a group called “Funk is garbage”, in order to collect signatures on the issue and encourage the presentation of a bill to Senate that would ban the genre altogether.

This bill was, in fact, sent to Senate, however, Senator Romario Feria assured that the ban on an entire musical genre was not “legally defensible ‘because of the right of free expression of thought guaranteed by the Federal Constitution’”. Reading this response from the Senate did not surprise me; as someone who is from the United States, the First Amendment of our U.S. Constitution assures the same right to free expression. BBC interviewed with Danilo Cymrot, a doctor in criminology, and he explained that there have been “other attempts to criminalize blacks, poor people, and favela residents” and one way to do that is to attack an aspect of pop culture that they are associated with, in this case, Samba and Funk.

The article makes the Brazilians who oppose Brazilian Funk look paranoid in my opinion. The article emphasized that those who oppose Brazilian funk did so because it was a bad influence on the Brazil’s youth. There were a lot of arguments saying that this style of music is a gateway to drug trafficking, drug consumption, irresponsible sexual encounters etc. Because I knew little about the topic beforehand I did question if any of these assumptions were warranted/ if there was anything that justified these strong thoughts on funk music. Brazilian funk and its reoccurring theme are most closely related to today’s Hip Hop and Rap in the United States. Hip Hop and Rap artists usually sing lyrics that tell rags to riches stories while their music videos portray drug use and the objectification of women, but it has become mainstream in our culture, especially among our youth. I came across a video that helped me understand more about why Brazilians might be so determined to eradicate the genre. About three weeks ago, reports were published of the Brazilian government having to shut down the largest favela in the country because of increased levels of drug violence. After watching this video, I began to understand why the impact of the music genre might be something that alarms Brazilians. I felt like after the army had to intervene in drug violence, citizens would do anything to ameliorate the issue. Perhaps the easiest way to begin the fight against drug trafficking, consumption, and other poor behaviors, was to attack a genre that portrays these aspects of culture as normal. 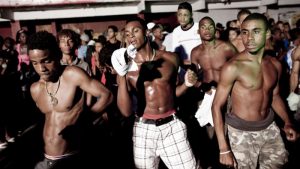 Our last class we began our new unit on music and dance. Music and dance are very important within different societies because they help to describe a specific cultural identity. These styles and genres might be popular throughout an entire country, maybe even continent, however when examined closer, there are slight variations that may occur based on a specific community or geographic region. I think this current issue in Brazil raises a lot of questions that are relevant to our new unit such as “Is it right to ban a music genre?” or even “If a genre IS banned, is the decision to do that ultimately disregarding parts of that culture?”.

Before choosing this article I had never heard Brazilian Funk, so I included one song (above) as well an Eminem song that you guys might be more familiar with as well. I thought it was really interesting to compare this Brazilian Funk song/music video to a music video by Eminem. “The Monster” was very popular in the United States a few years ago and touches on every theme that the Brazilian Funk genre is being criticized for within the first minute of the five-minute music video. I think it’s really interesting to see how the Eminem music video was received in the United States as another inspiring Eminem song about how he cleaned himself up after a rough past.