In this article the topic of immigrants in the military is discussed. It deals with Erick Ruiz who wanted to join the military but couldn’t due to his family being illegal immigrants. To speed up this process he joined theMilitary Accessions Vital to National Interest (MAVNI). A program which helps speed up the naturalization process. This program has since been suspended leaving many people who lack citizenship with no way to serve the country.

Latin Americans are portrayed as strong as they are trying to find a way to bring back the program. This shows a great amount of strength and unity.

This fits our class themes because it shows people can fight for what they believe in and identify with. 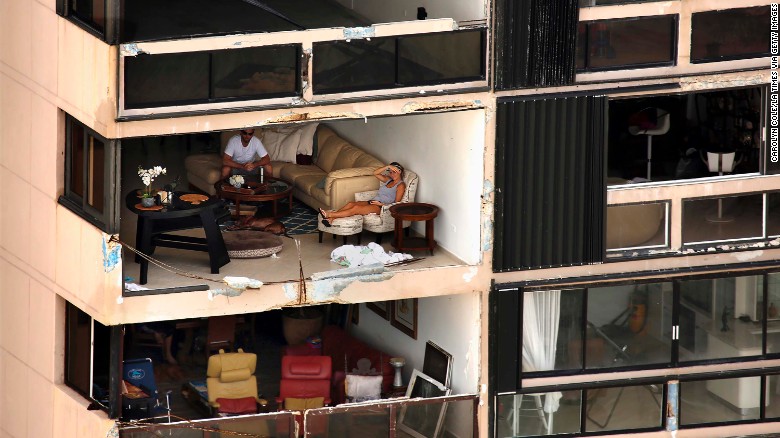 In this article the issue of the availability of water in Latin American countries is discussed. As the article deals with a man named Oquendo who risks his own health for the basic necessity of water. How does he do this? By drinking water contaminated by chemical waste products. The way Oquendo sees it “I’m going to drink it. I’ve drank it before. It tastes fine,’ Oquendo told CNN as he filled his jugs. ‘If I don’t drink water I’m going to die. So I might as well drink this water.” The way he sees it its better to live another day and risk being poisoned then to die from dehydration. This is due to a lack of funds in Puerto Rico which prevent a fast and effect response to the damage from  Hurricane Maria.

The people of Puerto Rico are portrayed as impoverished and desperate in this article. This can be seen by the way they describe Oquendo and his actions to get the water he needs to survive. They also show images of destroyed and dilapidated buildings in the area.

This relates to our class because it shows how Latin American countries like Puerto Rico are being neglected in their time of need. But also shows the efforts of many small groups who wish to help these people in need.

The advice I received was too elaborate more on the information I was adding and use sources that were relevant to the information I wished too add. As well as adding a section on the origin of Macumba, and comparing two of the other religions mention in the article. Which I will also incorporate.

Rivera-Rideau argues in this chapter on the development of Reggaeton as a popular music genre in the United States. He mainly accredits this to the hit song “Gasolina” by Daddy Yankee and other artists such as Shakira. Rivera then goes on to discuss how these artists when making songs that appealed to an English speaking audience portrayed an “appearance of whiteness” suggesting that Latino culture was being stereotyped for the sake of profits. This rationalization has two sides to it. On one side it can portray Latino culture as a bunch of people who love to party and on the other hand they can be portrayed in a similar light to people in the USA to help artists push their genre into the mainstream.

This article is mainly about the affects of President Trump hinting at military intervention in Venezuela. As expected the out come of this unexpected comment led to large amounts of controversy and negative backlash. Mainly since no one knew the President would say this and it entirely goes against the agenda of his defense committee who solemnly dismissed the claim. This claim also caused trouble for Vice President Pence who had a trip scheduled for several Latin American Countries days after Trump made this remark. Which led to many of the leaders of these countries worrying about military action in Latin America.

This comment arose mainly because of the turmoil that has been ongoing in Venezuela, in addition to this the country has been declared a dictatorship by a committee of nations. By threatening intervention this brings back fears of the cold war era where we sent troops to various Latin American countries for various reasons.

In my opinion I believe that this comment was completely uncalled for, it is also highly unprofessional to say. This is because it goes against the agenda of his defense committee and puts his Vice President in a very unfavorable position while touring Latin America. Also threatening military action without having just reason too is heinous and wrong.

In this article research has been conducted on the virus that took the world by surprise, this virus being Zika which has been devastating Latin America for the past few months. What this article deals with is why Zika has such diverse effects in Latin America, but the birth defects commonly caused by Zika in South America are not seen in other places at least to this degree.

This is because Zika is not a completely new virus that has just been discovered. Zika has been around in Asia for a long time, but the effects it had on newborns were never this drastic. Scientists proposed that their was a mutation in the virus. This mutation was called S139N. This specific mutation was seen first in French Polynesia and was the first case where chidlren displayed microcephaly in large numbers.

This is a problem for many Latin American countries whose economy relies on tourism. Mainly because the fear of infection could drive people away from affected areas. This could lead to problems for countries who are already struggling with trade embargo or recessions. Also this virus poses a problem for expecting mothers already in the country. As every second of the day poses a danger to their child.

This article does not detail why the act was created in the first place. There are multiple scholarly articles on the topic such as http://www.indiana.edu/~kdhist/H105-documents-web/week08/naturalization1790.html

There is a discussion talking about the relevancy of the act on the talk page as it was replaced by a later act.

In this article the Brazilian President Michel Temer talks about the rise of nationalism in many countries around the world. Also about how protectionism is not the solution to many of today’s problems. Protectionism is the practice of restricting or limiting trade between certain countries through tariffs or other methods.

President Temer states that limiting trade will only hurt other countries such as Brazil which is coming out of a major recession. Also that the planet is in desperate need of our help with the rise of global warming and the only way to help the planet is by working together. This goal wont be accomplished if all we are doing is imposing tariffs on one another. Corporations have been responsible for the destruction of our ecosystem and only the leaders of our world have the power to stop them. Working together should be are main goal to make the world a better place for everyone.

Working together can be seen with Venezuela and how countries are supporting its transition to a democratic state. By supporting each other we can help others achieve the happiness they deserve.

Macumba- animistic religious practice used in Brazil. I hope to discover what they worshiped and their beliefs. Wikipedia has little information on this topic.

Modernismo- literary movement in Spanish America. I hope to discover the type of writing style modernismo originated from, and how it influenced literature. Wikipedia doesn’t have a lot of information on it.